Deirdre has seen a man utterly unlike the old King. Naoise has seen a woman like no other. But she is betrothed to his uncle. What will their actions be, and what the consequences?

Her epic story, retold in three parts by Giles Abbott, is violent, sensual, funny, hugely romantic and tragic, and though it’s feet are in the past (Iron Age in origin) it is a story whose eyes are firmly fixed on the present.

Is beauty, for a woman, a blessing or a curse? And if a curse, why? Imagine the story of Helen of Troy, but told from Helen’s point of view!

Deirdre & the sons of Uisneach have escaped from King Conor, left Ulster & now are looking for a Scots King who can protect them, but will they ever find safety, or someone they can trust?

Recorded live in performance, text improvised in the moment from a deeply known story, this is like an audiobook for your eyes – a vbook in four gripping episodes! 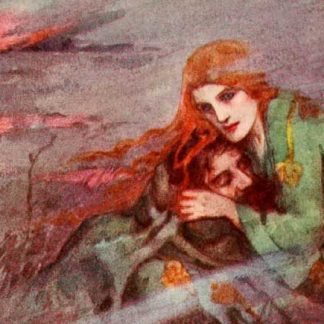