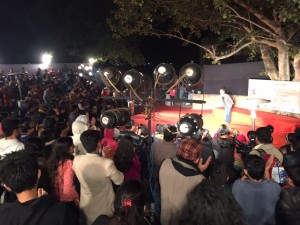 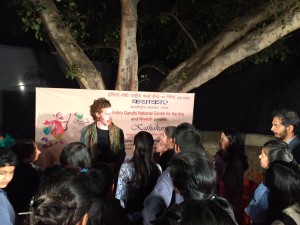 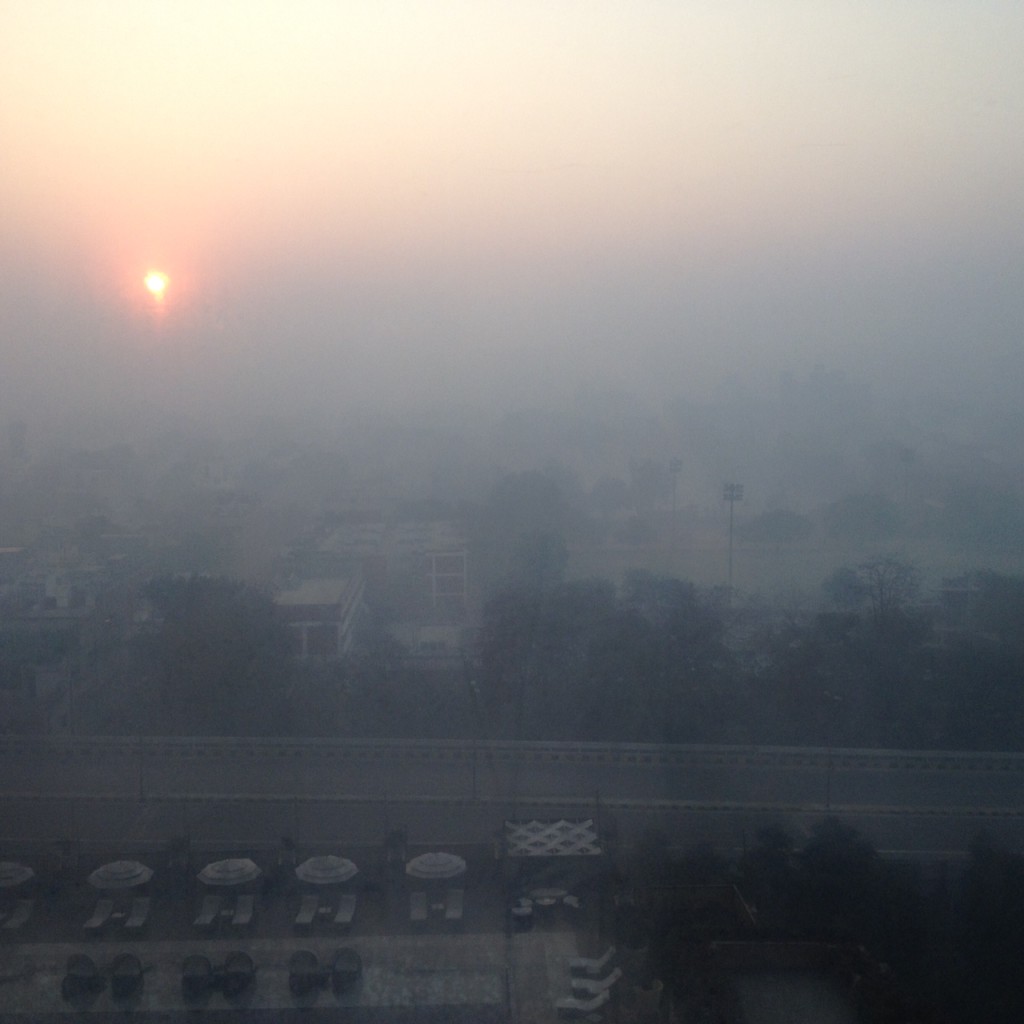 It’s a strange paradox; because I can’t see your face across a table, I became a storyteller. Because I became a storyteller, I get to see the world. Right now, I’m seeing the world that is Kolkata, West Bengal, and what a world it is! So, after the longest day’s travel we arrived at 3am at our hotel in Kolkata. I’d been briefed to expect crowds, chaos, hurly-burly at Kolkata airport but at that time in the morning, there was no such thing, only very tired, very courteous airport staff. A car was provided by British Council and we drove, not through the fabled Kolkata snarl-up, but easily through dark & empty streets. Had we really arrived in India at all? But then we arrived at a palatial hotel and our door was opened by a tall & beautiful man, splendid in white kurta, black trousers & a scarlet turban. Every inch the Bengal Lancer from my grandmother’s Imperial picture books, he pressed his palms together, inclined his head. “Namashkaa!” he said. We’d arrived, no question.

The next day we were met at lunchtime by Maryanne Dasgupta, an American lady who, fifty years ago, married a Bengali & settled in Kolkata. A prominent educator & writer, at the cusp of eighty, the lively & elegant Maryanne has retired from teaching and now devotes her energy to her own charitable foundation which works to educate gifted children of the absolutely impoverished. “Houses with three walls and a roof,” she said, “forget about four, and illiterate parents. We have twenty students now studying at University and a number going on to take their MAs.” Brilliant example of what energy & focus can achieve. So, in this company I began to experience Kolkata.

In daytime the roads are jammed. Old and beautiful English models, Morrises, now made in India, not Oxford, and known as Marutis, jostle and nose their way through teeming traffic. Lanes don’t exist. Junctions seem ambiguous, traffic lights negotiable. One peep on the horn means “I’ve seen you, come on”, two means “I’m here, I’m coming through”. More peeps means alarm and standing on the horn means “Sir, I protest!!”. Sudden changes in direction from other cars, sudden stops, demand the reaction speeds of a fighter pilot. And for all this, motorists seem completely calm. I hear car horns and voices everywhere. In every road flows a river of pedestrians, flooding over, breaking over, uneven, torn up and rutted pavements. Slim, dark men in shirts and trousers, in robes, in shalwar kameez, in kurta and dhoti, move, talk, call out, or just stand and watch. There is an endless variety of things to watch. East London, we are told, bustles with pop ups. Compared to Kolkata, East London knows nothing of either pop ups or bustle. Here, every square metre of pavement is anthill industrious. We pass a building propped up at one corner by posts as the road falls away about four feet. The space beneath hosts a business; a man making shoes. Further along, a square hole in the wall makes an alcove, about 3ft x 3ft, in which a man sits. On the street he has a brazier glowing with coals. The brazier heats his flat-iron. Cross-legged, board on his knees, he takes in and irons shirts. Next along, a man stirs a pot, fragrant with street-food spices. Another crouches on the floor polishing the shoes of a long-robed/haired/bearded man. A man squats next to a banyan tree, a mirror fixed to its trunk, and from this, his barber’s shop, he washes, soaps, shaves his customers’ beards. Near him a man squats, his back to the road and next to him a young woman, her sari lifted neatly from the dirt, her iridescent black hair coiling across the bare skin of her upper back. Both are busy mending the masonry of a wall. Through all this ceaseless hive, women in parakeet-colourful saris contrive to glide down the street, elegant as fairytale princesses. Kolkata is without doubt one of the most fascinating and wonderful places I have ever seen.

We visited a private home called the Marble Palace. Once the home of the Molik family, who still own it and live in part of it, their merchant wealth has built what looks and feels, outside, like a Victorian fantasy of classical Greece and, inside, like a wing of the V&A. Classical sculptures gaze, marble-eyed, at Italian paintings in the style of Caravaggio. Baroque decor and styling surrounds dazzling marble floors, not made of tiles but of immense coloured slabs cut and fitted as fine as woodwork marquetry and parquetry. Just as, in Kensington, Leighton House is stuffed with the exotic treasures of the East, here, the Molik family have filled their home with the treasures of the exotic West. No photos permitted – you’ll just have to take my word for it. It is simply stunning. And as soon as you leave its gates, at one step, you leave its serenity and find yourself once more in the hubbub of Kolkata.

Now, as you know, I can’t have actually seen all this. As you know, I live in coloured shadows and, where my eyes should focus, see only a blast of colour which I can’t see through, as if I’ve been staring at the sun. So how can I have perceived all this? Well, I do have a tiny telescope hanging round my neck. That helps. But, much more than that, my companions, Sooz and, yesterday, MaryAnn, describe to me the details that I miss. I “see” what they say vividly, just like, when you listen to a story, you see the characters, the landscape, in your mind. Much of your visible world, to me, is a story narrated by people with better eyes than I. So, I ask you, is it any wonder I became a storyteller?

To see some photos of my trip go to Further Adventures In Pictures, all kindly taken by other people!